CASE STUDY - Is Your Logo Always the BEST MESSAGE for Success?

CASE STUDY - Please note that to respect client confidentiality, we have substituted client logos and names with those of a fictional company.

GOAL - One of our clients needed to ENGAGE participants at several charity run/walk events around the nation.  As a large international pharmaceutical company, our client wanted to spread awareness of their product which was available to treat the medical condition highlighted by the charity and the events.  As a sponsor of the charity, our client had sales teams scheduled to set up booths at many of the national event locations, where they intended to ask the event participants to answer an anonymous short survey about their condition.  The survey would be conducted using tablets, and the survey respondents would receive a drawstring backpack as a thank you reward.  The client's management and marketing departments had set goals for the number of surveys to be completed at each event.

CONSIDERATIONS - In the past, our client had less-than-remarkable success, unable to engage enough of their audience to obtain as much target patient data as our client needed for their marketing efforts.  Event participants were not interested in stopping to take a survey, nor were they incentivized by the gifts that were previously offered.

Traditionally for these type of events, clients will default to using their company logo and product name as the main message and decoration on anything distributed to their target audience. While a company logo or product name can increase recognition of that information, it is only successful if the recipients accept and use the item(s) that are being distributed.  If the item doesn't have wide appeal to the recipients, or if the recipient is reluctant to display the imprint, then the opportunity for engagement is lost.  For recipients who have a medical condition, it may also be considered unappealing to have that condition highlighted on anything they would wear or use beyond the event itself.

SOLUTION - After consulting with our client, the proposal was to make the thank you gift more appealing to the recipients by using the majority of the decoration space for a more artistic rendition of a symbol that was well-known by the community affected by this medical condition.  The client company name and other information was still present, just in a less prominent placement and coloration.  Our example here shows the use of a colorful koi fish, along with smaller text that would lead the recipient to more information they could use in treating their condition.

Our client reported that the gift drawstring bags were an unprecedented success, drawing event participants to line up with the survey takers. Some event participants stayed in line even after the charity run/walk started, waiting to participate in the survey and receive the beautiful bags.  Our client reported seeing the bags in use during the run/walk, and at the post-event celebrations.  Survey takers were able to gather responses in numbers that exceeded set goals by several multiples.

LESSON - Base what you use in a project,  both product and decoration, on what appeals to the recipient and the intended goals.  Don't just default to a logo or product name. 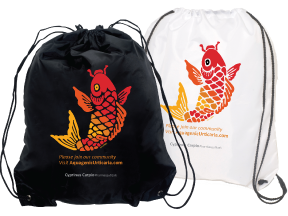